A wedding at Villa Bordoni, Greve in Chianti, Florence. Wedding music entertainment by Guty & Simone The Italian Wedding Musicians from Tuscany. Live music during  the wedding reception and the dance party afterwards. They are well known and they usually perform in front of both Italian and foreigner newly-weds
Villa Bordoni, Via San Cresci 31/32, Loc. Mezzuola, I-50022 Greve in Chianti, Florence, Italy

Someone said about Guty & Simone:
“… We also had Guty & Simone for our wedding in Tuscany in August 2012. They were superb. They played some Hendrix, The Stones, Floyd, The Doors… the list went on. They also did their version of Zeppelin’s Stairway to Heaven for us (we requested it in e-mails to them pre-wedding) which made the groom and best men very happy. Everyone was on the dance floor all night, even the dads. They added something really special to a perfect day …”
JaPe0 – Birmingham, United Kingdom (from Tripadivisor)

With Guty & Simone, the wedding music entertainers in Tuscany, during the wedding dinner and the party it is also possible to play music from iPod, Pc, Laptop, Smartphone, iPad, Tablet or any other sound devices 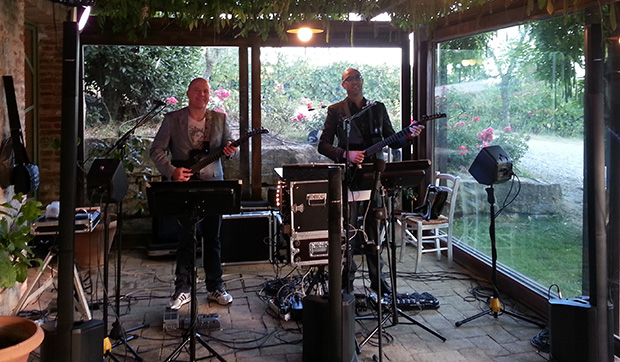