A wedding at Borgo Stomennano in Monteriggioni near Siena, Tuscany. Very nice Irish bride and groom from Dublin talking about the Tuscan musicians duo. The Italian Wedding Musicians Guty & Simone usually have their live performance during the after dinner party and they take care of the background music or the Dj set during the breaks.  Borgo Stomennano – Localita Stomennano, 53035 Monteriggioni Siena

Someone said about Guty & Simone:
“… Guty and Simone also played at our wedding reception in Tuscany on 26th May 2014….in short, they were absolutely fabulous and we highly recommend them!
Prior to our wedding they were responsive to our emails, always helpful and happy to offer their advice. They have a great repertoire (a good mix of some modern songs and classics) which we had a lot of fun choosing songs from, and they also very kindly learnt one new song that is special to us to play on the big day. …”
Matty – London, United Kingdom (from Tripadvisor)

A nice shot of the guests dancing around the bride and groom. 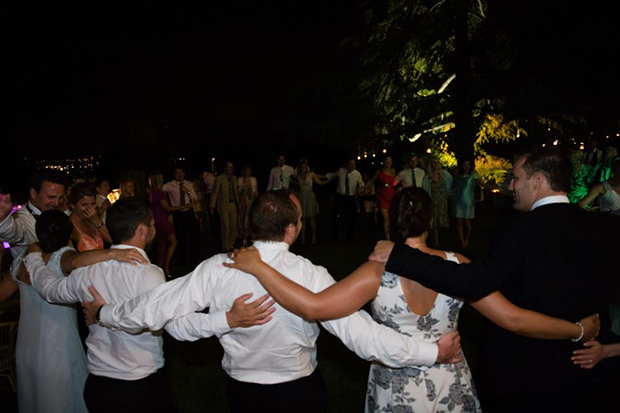